Cain was presumably the first born son of Adam and Eve in the first book of the Bible, the Old Testament's Book of Genesis. Famously, Cain was responsible for the murder of his younger brother Abel, thus committing the first murder in history.

After this murder Cain was sentenced to a nomadic life as a wanderer in a region respectively called Nod, making Cain the first nomad.

Cain was born of Adam and Eve, presumably being the first of their children.[1] This would have been within a year of being exiled from the Garden of Eden. The only clue of their location is that there were Cherubim guarding the eastern entrance into Eden (inferring they were in the east).

At Cain's birth, his mother Eve rejoiced and said with God's help she had brought forth a man.[2] Cain may not have been given the name "Cain" at birth, as the name means "possessed" or "acquired"; in reference to a spear. He may have bore the name Cain and eventually had his name come to be associated with a spear.

Sometime after his birth, his brother Abel was born, with it possible that there were other brothers born before or after he was born.

It is probable that there was a period of about a hundred years between when Cain was born and the biblical account. Presumed to be the first born, Cain would have been taught by his father Adam to work the soil and agriculture from an early age. Due to the curse that required Adam to manually work for food, Cain would've needed to become proficient at it quickly.

Sometime before he murdered Abel he would have married a wife, but probably had not yet had any children with with her.

Sin Crouches at his door

When Cain had grown to adulthood, he had become a farmer. When it was time to offer to God, Cain brought (possibly some leftover) fruit from the soil, while Abel brought the best of his flock. When God showed favor to Abel's offering, but rejected Cain's, Cain became upset.[3] Even after arguing with God about it, he became angry and took it out on his brother. At an opportune time he called Abel out into the fields. It was there that he killed him.[4]

Not fooled, God revealed to Cain that Abel's death was known. As a curse for his deeds, crops would no longer yield much food for Cain. This would force him into being a wandering Nomad, moving from place to place to survive. This ended his ability to do the job of farming he had his entire life.[6] Cain told God that his punishment was too much to bear and that anyone who found him as a Nomad would kill him; perhaps because of what he did to his brother and there were no other wanderers at the time.

Cain then took his wife, at least, and left for a land named for his curse -- Nod [7] ("Place of Wandering"). This place was somewhere in the far east away from Eden. It was there that he would stop wandering and build a city, naming the place Enoch, after the son he would have by his wife. Since this was about 130 years after creation, it is quite possible that Cain had other descendants that would join him when he built the city.

Unlike with Abel and Seth, Cain's death is not recorded in Scriptures. His name appears in the eighth generation in Tubal-Cain ("Brought of Cain"). Since Lamech, the man's father, boasts of killing at least two people while provoking the name of Cain,[8] it may be that Cain was still alive at this time. Compared to the line of Seth (born about the time of Cain's son Enoch), this would have put Tubal-Cain alive in the days of Enoch, son of Jared. It may be that Lamech named Tubal-Cain in honor of the death of the progenitor of his "race," putting a possible age at death of Cain at around 500 years old.

The Way of Cain

This great crime against humanity is remarked upon by none other than Jesus Christ when he spoke of the death of the prophets from the beginning of time,[9] indirectly comparing the way of the Pharisees to that of Cain. That blood was on the hands of those who persecuted, and would kill, the promised "seed of the woman",[10] whom Eve had once thought to be Cain, her first born son. The last writers of the Bible: Jude in his Epistle and John in his First Epistle speak specifically of the sin of Cain, whose evil [11] attitude of greed [12] had led to a cavalier approach to worshipping God.[13] The "way of Cain" was proverbially that of human nature, making oneself the measure of all things.

Cain's sin would be condemned for all time in the instructions given to Noah.[14] Before that, though, one could expect restitution of like kind—death at the hand of friends and family of the murderer. Lamech mocked God at the perceived leniency towards murder, saying anyone who tried to take revenge upon him would suffer eleven times more than those who might have killed Cain.[15] As a result of this attitude, murder became common upon the earth, spreading over to the family line of Seth, who had replaced Abel. Jesus himself specifically preaches that a neighbor should be forgiven seventy-seven times,[16] a direct contrast to Lamech's statement.

Cain was the first in a short-lived race, referred to as the "Cainites". Cain's arrogance and disobedience towards God was carried out throughout the whole world after him. Seemingly gaining a position in society, he bore a son with his wife named Enoch and then built a city named after him. It was here that Cain's ideology was fostered and grown and grew to be a ruling philosophy of the world at the time.

Infact it was not until the Sethite line was founded, when people on the Earth began to obey God once again.[17]

The other bearers of the name Qayin—the Kenites [18]—lived among, and probably were themselves Midianites.[19] The Kenites were probably skilled metal workers, an assumption based on the only other use of a cognate of qayin, which is translated "spear." If this is the case, there may be a double meaning of "Tubal-Cain"—bringer of the spear, giving another legacy of Cain: warfare.

Though the use of the term "sons of God" in Genesis 6 is problematic, the best interpretation seems to be that these were the righteous sons of Seth, who in the days of Seth's son Enosh began to "call upon the name of the LORD".[20] By the days of Enoch the prophet, the likes of Lamech's daughter Naamah ("the beautiful one") became attractive to those in the community of Adam, the "sons of God".[21] It was thus that humanity became fully corrupted, leading to the need of the Great Flood.[22] The offspring of these unions were stronger and more successful than all others. These same people, known as "giants" among men, would survive the flood, presumably in the progeny of Ham, son of Noah. The post-flood giants were all descendants of Canaan,[23] a child quite possibly named after Cain. If this assumption is true, then all Hamites are descendants of the giants, though the "giant gene" that produced physical giants was apparently only passed by Canaan.

Cain is an English version of the Hebrew name Qayin (קין). The root from which this word was taken was QWN <koon>, which means "lament." However, the word qayin is translated once as "spear".[24] Since the word came to mean "metalsmith" in related languages, the clan of Qayin (the Kenite) were thought to be metal workers. Its meaning could be the primary name given to the firstborn of Adam after the fact. The words Eve spoke provide a name that sounds the same, but is spelled differently. Eve proclaimed "I have gotten (qanah) a man (ish)".[25] indicating that she named her son, Qanyn (Kenan), "a possession." When this account was revealed to Moses, the history of Cain was well known to him. Since Moses would not offer a self-contradiction, the two names probably diverged in Cain's lifetime. 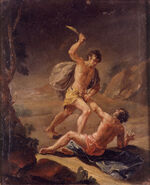 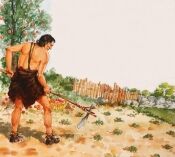 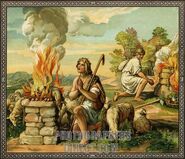 Cains sacrifice
Add a photo to this gallery

Retrieved from "https://bible.wikia.org/wiki/Cain?oldid=28360"
Community content is available under CC-BY-SA unless otherwise noted.