My God, My God, Why have you forsaken me? 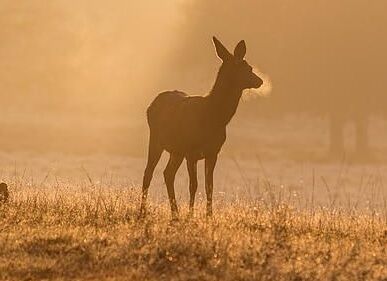 My God, my God, Why have you forsaken me?

There are some questions that don't make sense until they are asked by the right person. The question penned by David is surely one that many feel in their darkest times--times that cause doubt to arise in even the purest heart. The king, a man loved by Yahweh, found it hard to reconcile much of his trouble with his knowledge of God's loyalty to His promises. But David had proven by his actions at times that he was not worthy of God. He felt himself to be the lowest of the low, an unclean maggot in the garbage dump[1]. To his mind, there was not much doubt that God forsook him because he was a sinner.

As the psalm unfolds, though, the answer becomes clear enough for David to commission his song leader to present the song to the tune of "A doe of the dawn"[2]. The music, probably played on lute and lyre, would set the stage for the hearer in the temple. The original audience would identify with a pristine forest, in the cool of the day with an innocent doe coming to eat grass and lick dew (food and drink from God). As the prelude concluded, discord would jar the listener: "Eli, Eli, Lamah..." --- My God, My God, Why...?" The doe rears up, hooves beating the air, and she turns to run. An enemy has come to the forest.

David writes in hyperbole so bizarre that those who read, or heard, the original could paint their own pictures of agony. Their hearts would beat hard in their chests as they identified with their beloved king, probably remembering that his predecessor had turned out badly. They knew that God had proven Himself loyal to his promises over and over again. Disaster followed sin, especially when it was the pious who had sinned. The shepherd from Bethlehem had seen some really bad times before he had been crowned king. In what seemed to be exaggeration, the worst punishment ever devised by mankind was vividly portrayed over a thousand years before it happened. The thirst[3], the contortions[4], pierced hands and feet[5], and even a "broken heart"[6]--all foretold in song in the songbook of the temple.

Perhaps to the imagination of the worshippers the picture of the innocence lost at dawn would have gone all the way back to Genesis. Apart from the Exodus, the story of Adam and Eve is likely to be the best known lesson in any young person's education. The story behind the tune "A Doe of the Dawn" is lost to history, but it is not hard to see an alogory behind it. Perhaps like the ancient Greek fables, it had been used to relate to that part of human nature everyone knew so well. Who would save the innocent prey of the predator? Where was the mighty buck to protect the doe? Surely there was a savior and a new generation would populate the forest.

After finding safety with the Savior, the King of the realm, the message turns to hope for a happy ending. The message must get out not just to the congregation of Israel and Judah, but to everyone in the world. The people of God, in His kingdom, has always had the commission to tell the rest of the world about Him[7]. This is the reason why David, and later Jesus, had to suffer so much. Without the suffering, there would be no knowledge of the seriousness of sin[8]. Without the shedding of blood--untold thousands of sacrifices in the Old Testament, and Jesus as the perfect Sacrifice in the New Testament--there cannot be reconciliation to the holiness of God[9]. The good news is that, though no one can save themselves, God can save anyone[10]. Those saved will always serve as seeds in the world, so that the Righteousness of God will be known.

Why did it seem like God had turned His back on David? It was because he needed to know that God takes sin seriously. Once the king showed that he was humble before the Greater King. Jesus had humbled Himself, taking the punishment due to us all, to show the efficacy of His righteousness to cover the grossest of sins. In quoting Psalm 22:1, and fulfilling its unbelievable prophecies, Jesus could finish his work, shouting in a loud voice: "It is finished"[11]--a reflection on Psa. 21:31--"He has done it".

Let us, children of the Living Savior, get the message out. God is Good, All the Time.